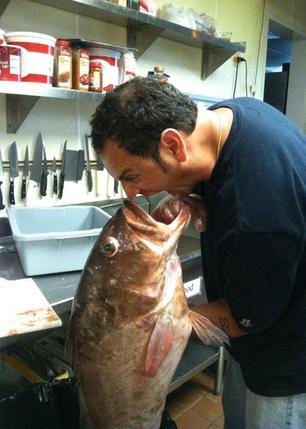 ​Nicola (Nick) Pittari was born in NY.  His mother and father being from Sicily, moved his family back to St. Alessio, Sicily when Nick was a young boy.  His family, as most Sicilians do, centered their life around family and food.  While taking after his mother, Nick has developed not just a love for eating fine foods, but a passion for cooking TRUELY authentic Italian cuisine as well.

While Nick is busy preparing delicious foods, his wife Chrissie, ( his good ol' southern girl from the Outer Banks) tends to the front of house in the restaurant.  It is not unusual for his children to help out in the restaurant as well.

​Nick first moved to Wilmington in 1996, and with the help of his sister, he opened Pizza Bistro at the Cotton Exchange in downtown Wilmington.  They sold Pizza Bistro in the latter part of 1999, and in early 2000, Nick and Chrissie bought Incredible Gourmet Pizza on 17th Street Extension and at Plaza East Shopping Center.  They opened the New Center Drive location in 2004.  In October of 2006, Nick and Chrissie sold Incredible Pizza and three days later... purchased and started work what would become..."Nicola's."

Nick envisioned an Italian eatery that was not the typical Italian restaurant.  He wanted color, boldness, and creativity.
A warm and friendly atmosphere where every dish is made with love!
A little hidden gem that makes you feel like you are part of the family.
And at last, an Italian restaurant that makes daily:
~FRESH PASTA
~ WOOD FIRE OVEN PIZZA
~ FRESH BAKED BREAD
~FRESH MOZZARELLA

~MADE TO ORDER PASTA AND ENTREES.

​Today, we still believe in giving you the best. Because of this, we pride ourselves on having fresh ingredients every day. We like to think of our food as true Italian comfort food.

Come on by, grab a pizza, pasta, and a glass of wine and be a part of the Nicola's family!